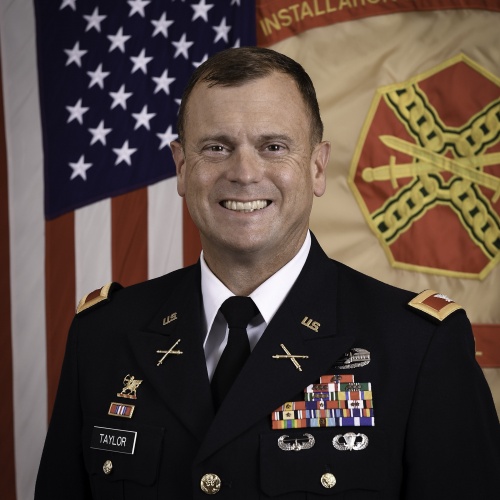 Colonel Rhett A. Taylor enlisted in the Indiana National Guard in 1991.  He received his commission as a Field Artillery Officer in 1997 through the Reserve Officers Training Corps (ROTC) upon his graduation from Indiana University-Purdue University at Indianapolis.

His first duty station was Vilseck and Bamberg, Germany, serving in the 1st Battalion, 6th Field Artillery Regiment (1st Infantry Division) as a company fire support officer, platoon fire direction officer (Kosovo), platoon leader, and battalion logistics officer from 1998-2001.  Following the field artillery advanced course he remained at Fort Sill, Oklahoma where he was assigned to the 214th Field Artillery Brigade.  There he served as the brigade fire control officer and deployed in support of the initial invasion of Iraq during Operation Iraqi Freedom in 2003.  He then commanded Bravo Battery, 1st Battalion, 14th Field Artillery Regiment from 2003-2005.

Upon completion of command, COL Taylor, was assigned to 205th Infantry Brigade, Camp Atterbury, Indiana.  There he served as an observer-trainer and operations officer in 2nd Battalion, 335th Infantry and a brigade plans officer.  He then deployed as part of a Military Transition Team to Mosul, Iraq where he served as an operations officer advisor to an Iraqi Brigade from 2007-2008.

Following Command and General Staff College he was assigned to 2nd Brigade Combat Team, 4th Infantry Division at Fort Carson, Colorado.  There he served as the Battalion Executive Officer for 3rd Battalion, 16th Field Artillery Regiment.  He later served as the brigade fire support coordinator during the brigade’s deployment to Kandahar City, Afghanistan as part of Regional Command – South, in support of Operation Enduring Freedom from 2011-2012.

From July 2015 to July 2017 COL Taylor commanded 2-289 Infantry Regiment at Camp Atterbury, Indiana.  The regiment was responsible for the training and mentoring of 12 National Guard battalions that resided within a six-state region.  Following battalion command COL Taylor served as a planner in the Commander’s Initiative Group for the Command General of Training and Doctrine Command; Fort Eustis, Virginia.  Upon graduation from the Army War College, COL Taylor assumed duties as the Director, G-3/5/7 Fires Center of Excellence and Fort Sill.

He is married to the former Ms. Amy Heckelmoser.