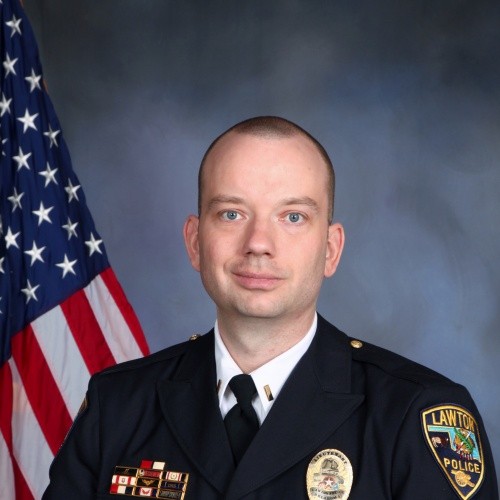 Lieutenant John Schwenk, Jr. was born and raised in Lawton, OK. He attended MacArthur High School and obtained a degree from Cameron University. Schwenk began his career with the Lawton Police Department on May 3rd, 1999. He served in the Uniform Division for over 11 years. During that time, Schwenk was utilized for several years as a Traffic Officer. He attended Traffic Collision training as well as DUI enforcement training that included him accomplishing certification as a DRE (Drug recognition Expert) through IACP. The following year Schwenk became a DRE Instructor. Schwenk was also a member of the Department’s Bike Patrol Team.

In September of 2010, Schwenk became a Detective and was reassigned to the (CID) Criminal Investigation Division. Schwenk was soon designated as one of the Divisions Fraud/White Collar Investigators, primarily investigating those specified cases for about 2 ½ years, until he was designated as the Divisions Audio/Video Forensic Investigator. While in CID, Schwenk investigated all kinds of cases, ranging from Petit Larceny to Murder.

Schwenk is a member of the Departments Crisis Negotiation Team. He has also been utilized extensively as a Field Training Officer to help train new officers.