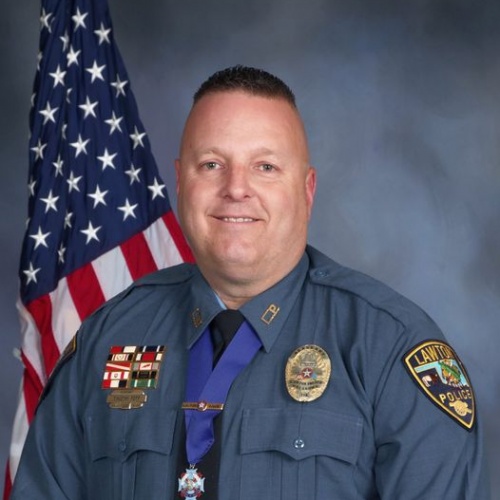 Sergeant Timothy Poff sought his career in law enforcement due to the bombing of the Alfred P. Murrah Federal Building on 04/19/1995. His first commission was on 05/16/1995, to 10/1995 with the Waurika Police Department. Next, he served from 11/1995 until 05/1998 with the Comanche County Sheriff’s Office serving first in Corrections and as a Reserve Deputy Sheriff, to Deputy Sheriff in Patrol Division, and later as a Tactical Team member. In 05/1998, he hired on with the Lawton Police Department working in Uniform Patrol Division on various shifts and assignments, before transferring to the Training Division in 2019.

Sgt. Poff has served as a Field Training Officer and Acting Supervisor since 2001, a Police Technical Diver on the Dive Team since 2003, transferred to the Gang Unit from 2006 to 2010, and served on the Tactical Team as an Entry Officer and Police Sniper from 2008 to 2010. Sgt. Poff became a CLEET Basic Instructor and taught gang awareness classes and presentations to the public, civic and church groups, school students from elementary through college, and law enforcement venues for local, state, and federal levels across Oklahoma. From 2007 to 2010 Sgt. Poff was elected as the Southwest Regional Director and State Board Member for the Oklahoma Gang Investigators Association, (OGIA). He also holds an Advanced Officer Certification from CLEET, teaches in the LPD Basic Police Academies, is a CLEET Certified Firearms Instructor.

Sgt. Poff earned two college degrees from Oklahoma State University- Oklahoma City while at LPD. The first, an Associate in Applied Science Majoring in Police Science and a Bachelor of Technology in Public Safety Management. Sgt. Poff transferred to the Training Division in May 2019 where he currently serves as the Training Coordinator.

Throughout his career with LPD, Sgt. Poff has been recognized and received many police commendations, awards, and medals from LPD, outside agencies, military officials from Ft. Sill, State of Oklahoma government officials, and from the Oklahoma Association of Chiefs of Police. Some of these include the Police Shield, Medals for Valor, Life Saving, and the 2008 Special Teams Officer of the Year!