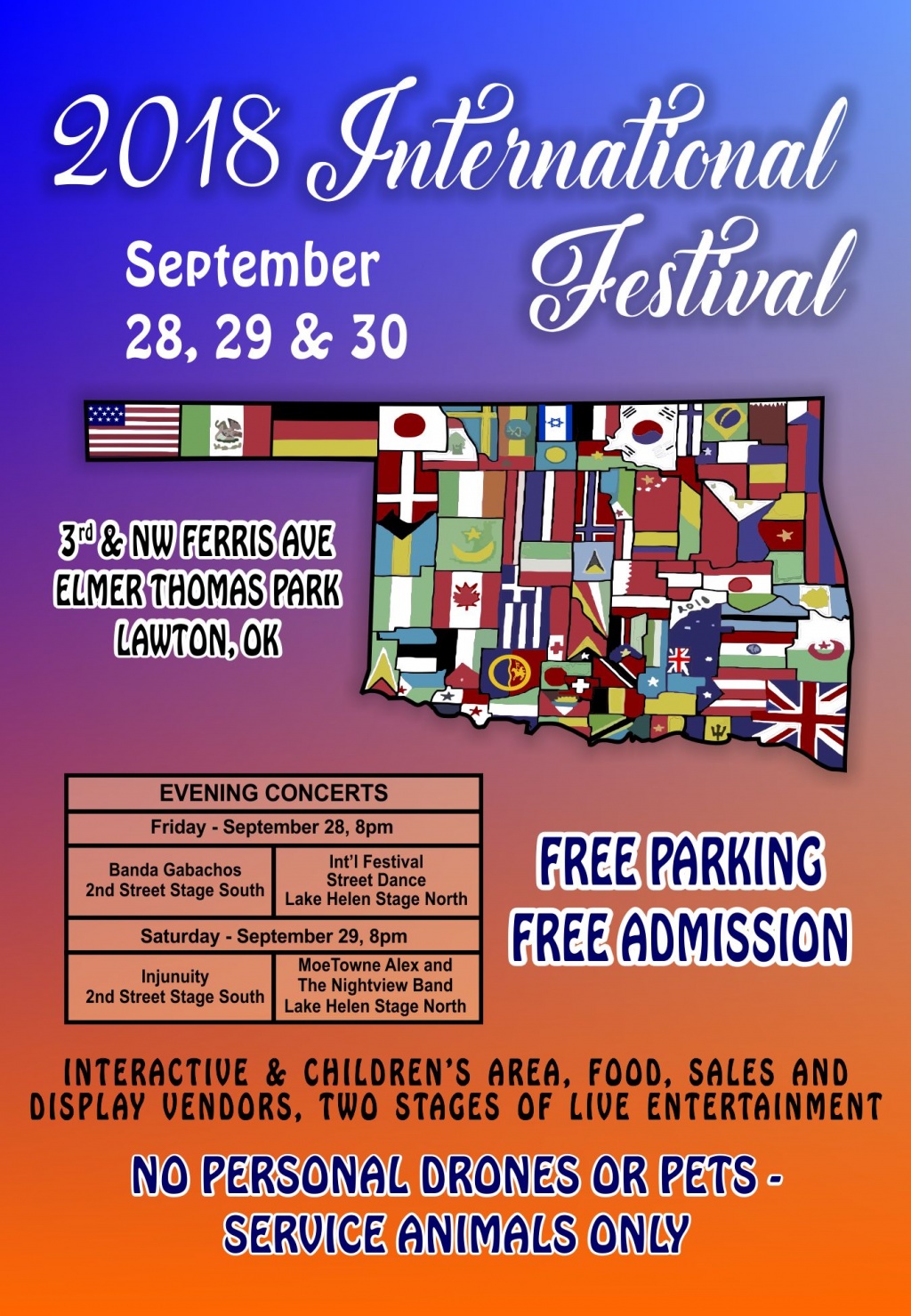 This year, Lawton’s International Festival will celebrate its 39th year of promoting greater awareness and appreciation of Lawton’s diverse heritage.  The festival provides local, culturally-based organizations, groups and individuals an opportunity to display aspects of their culture, mainly through performances and demonstrations.

For vendor and/or volunteer performers information as well as the annual poster design competition, call the Arts & Humanities Division at 580-581-3470 or 581-3471 to check on applications and deadlines.

No Admission or Parking Fees with Free concerts & Entertainment!!!

Festival goes on rain or shine and some events may be subject to change without notice.

Two Stages and an Interactive Area

Please note: The festival will go on rain or shine and some events may be subject to change without notice.

Thank you for making this festival possible!

MAJOR SPONSORS: City of Lawton, Lawton Arts & Humanities Council and its International Festival Committee, Oklahoma Arts Council, National Endowment for the Arts and the McMahon Foundation. In addition, funding and/or support of this event is partially provided by the Lawton Fort Sill Convention and Visitors Bureau.

Media Sponsors - Tune in as they share our news! Visit them on site at the festival!

Townsquare Media Lawton - Visit them on site at the festival!

The Lawton Constitution Newspaper - www.swoknews.com   Visit them on site at the festival!

KCCU - FM - www.kccu.org Visit them on site at the festival!

Click here to open the foldable festival brochure with media sponsor locations as well as schedules.

Also, thank you to the following for volunteering in the Interactive Area; Museum of the Great Plains who will teach Ancient Art of Suminagashi, Japanese Marbling and Hank Poppe who will bring his telescope for star gazing after dusk (provided no clouds).

Banda Gabachos performs with a Mexican music style influenced by German music from the northern part of Mexico, norteño, meaning "northern," or música norteña, "northern music",  They have performed at Cinco de Mayo Festivals in OKC, Day of the Dead Street Festival at the University of Oklahoma, 29th Street Children’s Festival, Independencia de Mexico Festivals and Academia Day.  Visit them on Facebook, www.facebook.com/BandaGabachos .

The International Festival Committee is bringing back the popular community “Street Dance”, Friday, September 28 at 8pm on the Lake Helen Stage (North). The street dance’s DJ will present many musical genres from around the world. This very popular event plays host to all ages.

They are an original R&B Soul Band with sounds of the 70's 80's & 90's that include HipHop, NeoSoul Jazz and Blues, They have performed in Texas, Oklahoma and Arkansas. In Oklahoma, they have performed at the Oklahoma City Arts Council’s Arts Festival, Concert in the Garden at the Oklahoma State University in Stillwater, Myriad Gardens in Oklahoma City, and more! Visit them on Facebook at www.facebook.com/Moetowne-Alex-The-Nightview-Band.

Injunuity is a Native American flute-centric roots group forged in 2007 by award winning composers Brad Clonch (Mississippi Choctaw) and Jeff Carpenter (Chickasaw). Since their inception Injunuity has released four full length albums; snatched up multiple national music awards; performed across the US and Europe; and has been featured in radio, tv, documentaries, and feature length films. Immediately this cultural sound and blend of genres drew attention, leading to the addition of two members; Philip Sullivan and Brian Harrison.

The inspiration drawn for all original tracks and compositions are based off the ability to experience tribal culture and life daily in Oklahoma, as well as interaction among other tribes, historians, storytellers, and even trips to the original homelands of the Chickasaw, Choctaw, and Cherokee people. Native Americans have profoundly helped shape the United States. The music of Injunuity helps revisit these times and keep them alive through song. Injunuity’s music promotes the introduction of Native American music and history into popular culture, helping break stereotypes about Native Americans and the music within the Indian Culture. Simply put, “we’re not your grandfather’s flute music!”  Visit their website, http://injunuity.net.

There will be free activities for the young patrons in this area Saturday and Sunday. Molly Buckley, Chair of the Children’s Area notes that she will have the following and a lot more! Free games & activities:  11am – 5pm Saturday and 12 - 5pm, Sunday, including Chinese masks, USA mats, Mexican Paper Flowers, and Tahitian headdresses, hula-hoops, giant bubbles, and the hopping bouncy balls.

The Interactive Area at the Garden Pavilion will have the MacArthur High School Band’s Color Guard on Friday, Telescope Star Gazing with Hank Poppe (clouds permitting) Friday and Saturday at dusk. On Saturday, the Museum of the Great Plains will present the Ancient Art of Suminagashi, Japanese Marbling at 2:30pm. More artists will be announced at a later date for the Interactive Area Schedule.

A Touch of Beauty by Jackie

More information will be up loaded as they become available. 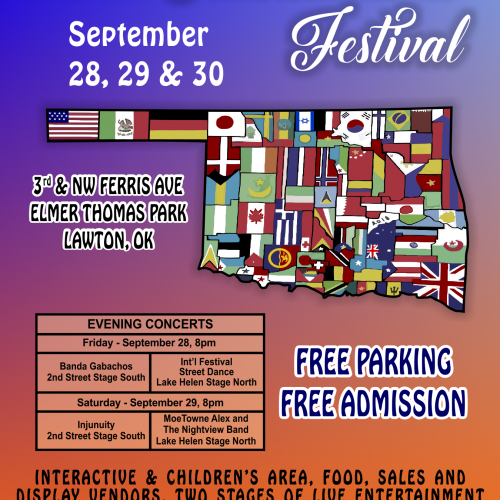 More information about free evening concert line up and more!

For more information about the International Festival Poster Competition, call the Arts & Humanities Division office at 580-581-3470 or 581-3471 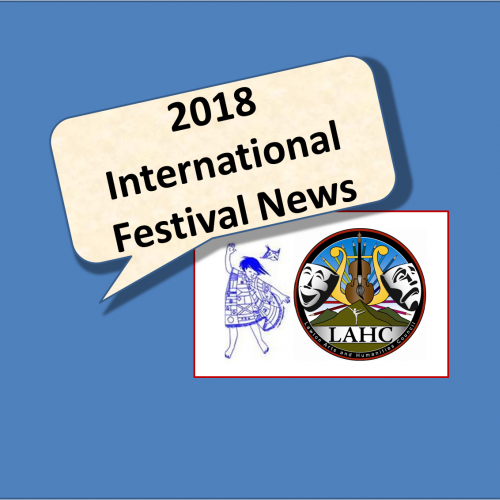 Announcing important dates for the festival and how to participate!