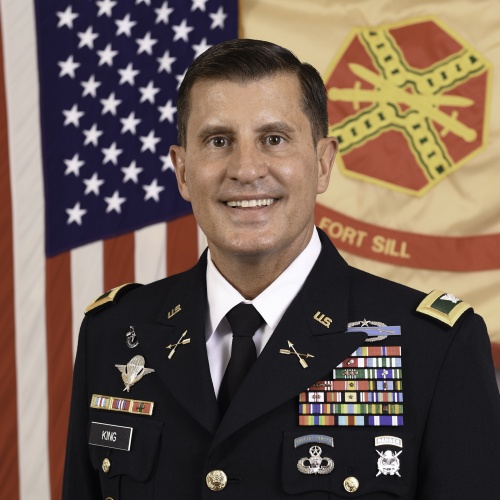 COL Don A. King Jr., native of Arcadia, Florida, enlisted into the US Army in 1986.  His first assignment was in the 2nd Battalion, 75th Ranger Regiment. While there, COL King attended Ranger School and deployed to Operation Just Cause.  In 1991, he attended the Special Forces Qualification Course and graduated as a Special Forces Medic.  He was then assigned to Company C, 2nd Battalion, 10th Special Forces Group (Airborne).

In 1995, COL King was commissioned as an Infantry 2d LT through Officer Candidate School (OCS).  Following OCS, he was assigned to the 3rd Battalion, 75th Ranger Regiment.  COL King served as a Ranger Platoon Leader before completing the Special Forces Detachment Officer's Qualification Course and was then assigned to the 3rd Special Forces Group (Airborne) in 2001.  He commanded three Operational Detachment-Alpha(s) and deployed twice in support of Operation Enduring Freedom.  He was then assigned to USASOC to serve as the Executive Officer to the Deputy Commanding General and deployed to Iraq as the Executive Officer to the Deputy Commanding General of Combined Forces Special Operations Component Command and the Commanding General of a Joint Interagency Task Force.

From 2012-2014, COL King Commanded the US Army Marksmanship Unit, deploying portions of his command to conduct marksmanship training for the Afghan National Army.  Following this command, he served as the Executive Officer to the Commanding General of the United States John F. Kennedy Special Warfare Center and School.  Most recently he served in Afghanistan as the Chief of Staff for the NATO Special Operations Component Command Afghanistan and the Special Operations Joint Task Force Afghanistan.  COL King assumed command of the U.S. Army Garrison Fort Sill in July 2018.

COL King is married to the former Rika Mando of Fayetteville North Carolina and has two sons, Tyler and Dakota.