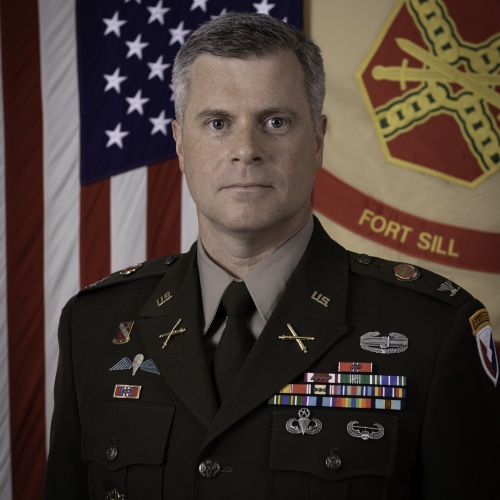 Colonel James (Jim) H. B. Peay IV, graduated from the Virginia Military Institute in May 1998 with a Bachelor of Science degree in Civil and Environmental Engineering and was commissioned into the Army as a Second Lieutenant in the Field Artillery. Colonel Peay served his company grade years in the Republic of South Korea with the 2nd Infantry Division, followed by the 101st Airborne Division (Air Assault), and then the 82nd Airborne Division. During this time, he deployed three times to Iraq in support of Operation Iraqi Freedom.

Following his battery command, Colonel Peay was selected for the Personnel Exchange Program, and was the U.S. Field Artillery Exchange Instructor to the United Kingdom at the Royal School of Artillery at Larkhill, England. Upon completion of his tour in the U.K., Colonel Peay attended the U.S. Navy Staff College in Newport, Rhode Island. As a Major, Colonel Peay served in the XVIII Airborne Corps Headquarters, the 82nd Airborne Division, and as the Assistant Executive Officer / Aide to LTG Gary Cheek, the Director of the Army Staff, Headquarters, Department of the Army.