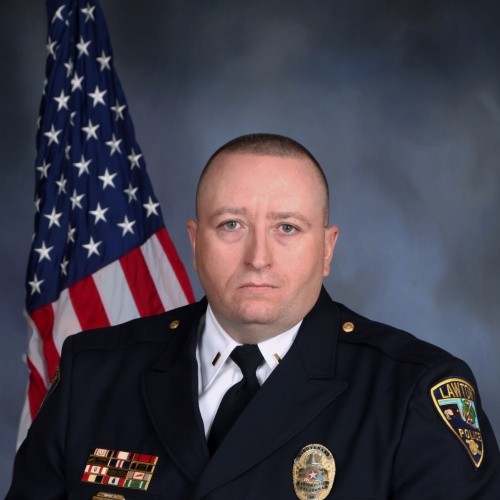 Captain (CPT.) John Mull began his career with the Lawton Police Department in March of 2002. At the beginning of CPT. Mull’s career, he has been assigned to the Uniform Division as a Patrol Officer and Field Training Officer. While in patrol, CPT. Mull was assigned to the United States Marshal’s Warrant Task Force. In 2011 CPT. Mull was assigned to the Gang Unit until his promotion to Lieutenant in 2012. While serving as a Lieutenant, CPT Mull served in several supervisory positions to include Uniform Patrol, Gang Unit and Special Operations. After his promotion to Captain, he served as the commander of the Technical Services Division. While serving in that capacity he supervised the Police Records Section, Property, Building Maintenance and the Lawton City Jail.

During his career, CPT. Mull served on and supervised several department special teams to include; Tactical Team, Honor Guard and the Hazardous Materials Team. Captain Mull is also a CLEET Firearms Instructor. He holds an Advanced Police Officer Certification from CLEET as well as a Bachelor’s degree in Criminal Justice Administration from Cameron University.

CPT. Mull had five years previous law enforcement experience with the Comanche County Sheriff’s Office and the Sterling Police Department. CPT. Mull also has 28 years of service with the US Army and the Oklahoma National Guard.

CPT. Mull is currently the Commander of Adam Team.