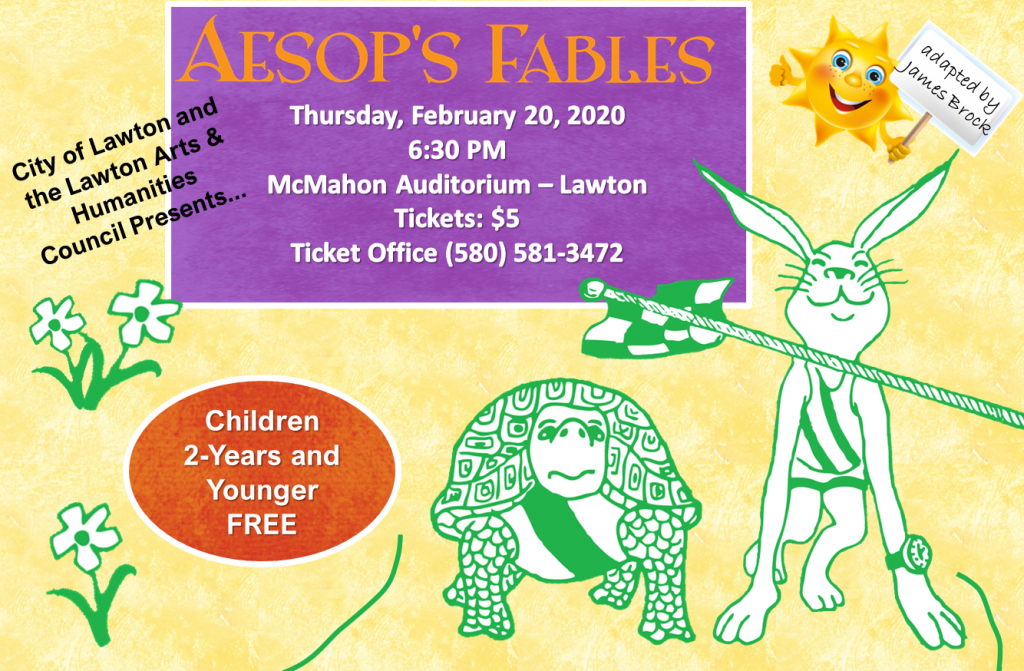 Aesop’s delightful fables of wit and wisdom will come to life on stage at the McMahon Memorial Auditorium on Thursday, February 20. The children’s play is performed by actors from the Lawton Community Theatre and is perfect for both adults and children to enjoy in this exciting family friendly show. The general public is invited to attend the evening performance at 6:30 p.m. Tickets are $5 for general admission.The show is approximately 50 minutes in length.

Aesop’s Fables is an updated version of four of the timeless storyteller’s most popular fables and is a fast-moving play in which all the scene changes and costume adaptations are done in full view of the audience. As the various actors become the Rabbit, the Turtle, the Fox, the Crow, or the Donkey in the Lion’s skin, the audience is brought into the action of the play by seeing the change from actor to character and back to actor again. Four of Aesop’s best loved fables . . . “The Fox and the Crow,” “The Hare and the Tortoise,” “The Donkey in the Lion’s Skin,” and finally, “The Fox and the Sour Grapes,” are delightfully created in this interesting approach to storyteller’s theatre.

The popular evening performance will begin at 6:30 p.m. and is open to the public. Ticket sales open Monday, January 20 at the McMahon Memorial Auditorium ticket office located on the auditorium’s west entrance, 801 NW Ferris Avenue. Tickets are $5.00 and children 2-years and younger are admitted FREE! The ticket office hours are Monday through Friday from 9 a.m. to 12 noon and 1:30 p.m. to 4:30 p.m. Call (580) 581-3472 for more information on ticket purchases.

This year’s production has a very special local connection. The Aesop’s Fables was adapted by Dr. James Brock of Lawton, a longtime educator, choreographer, and an award-winning playwright. Brock has written plays for almost every theatre field available. Two award winning one-acts, The Last Act and A Mormon Incident were performed respectively at Oklahoma University and Southern Illinois University at Carbondale where he received the degrees of MFA and Ph.D. in theatre.

In the historical theatre field, Dr. Brock has received several commissions to develop and write scripts dealing with the Native American and Pioneer experiences in his native state of Oklahoma. These works include Burning Bright, History Lives With Fort Sill and Farewell To A Calico Legend, which has appeared at several museums in and out of his home state. He also wrote a play for Lawton’s centennial called Oklahoma Opening, a history of the city and of pioneer woman Mattie Beal.

In the children's theatre area, Brock has written and produced over twenty plays. One of these, The Boy With The Blue Nose, was commissioned by the American Cancer Society and deals with the serious problem of children smoking.

On the lighter side, Aesop's Fables has enjoyed worldwide success in frequent performances and has been included in a Japanese Anthology of Best Children's Plays. Brock wrote the play in 1979 while teaching in Lawton.

In semi-retirement, Brock continues to write plays for the broader theatre markets; two of those projects include Cinderella's Mice, a full-length children's musical play, and Margaret Knows, a small cast psychological drama with music. Brock taught at Tomlinson Middle School for 20 years and after retirement, was an adjunct for Cameron University for an additional 10 years.

The Aesop’s Fables production is supported in part by the Oklahoma Arts Council, which receives support from the State of Oklahoma and the National Endowment for the Arts. Additional support comes from the McMahon Auditorium Authority, Lawton Community Theatre, the City of Lawton, and the Lawton Arts & Humanities Council.

About The Lawton Arts & Humanities Division

The Lawton Arts & Humanities Division supports the cultural endeavors of the City of Lawton by providing resources and outreach to area organizations and individuals. The division manages the McMahon Memorial Auditorium and is part of the Parks and Recreation Department. In addition, it provides assistance to the City of Lawton's various boards and trusts, to include the Lawton Arts & Humanities Council and the McMahon Auditorium Authority. The Division coordinates the annual Freedom Festival and the International Festival. The office also serves as the point of contact for film, music & video production support requests. More information is available at www.lawtonok.gov/departments/arts-and-humanities.

About The Oklahoma Arts Council

The Oklahoma Arts Council is the official state agency for the support and development of the arts. The agency’s mission is to lead in the advancement of Oklahoma’s thriving arts industry. The Oklahoma Arts Council provides approximately 500 grants to almost 250 organizations in communities statewide each year, organizes professional development opportunities for the state’s arts and cultural industry, and manages hundreds of works of art in the public spaces of the state Capitol. Additional information is available at arts.ok.gov.