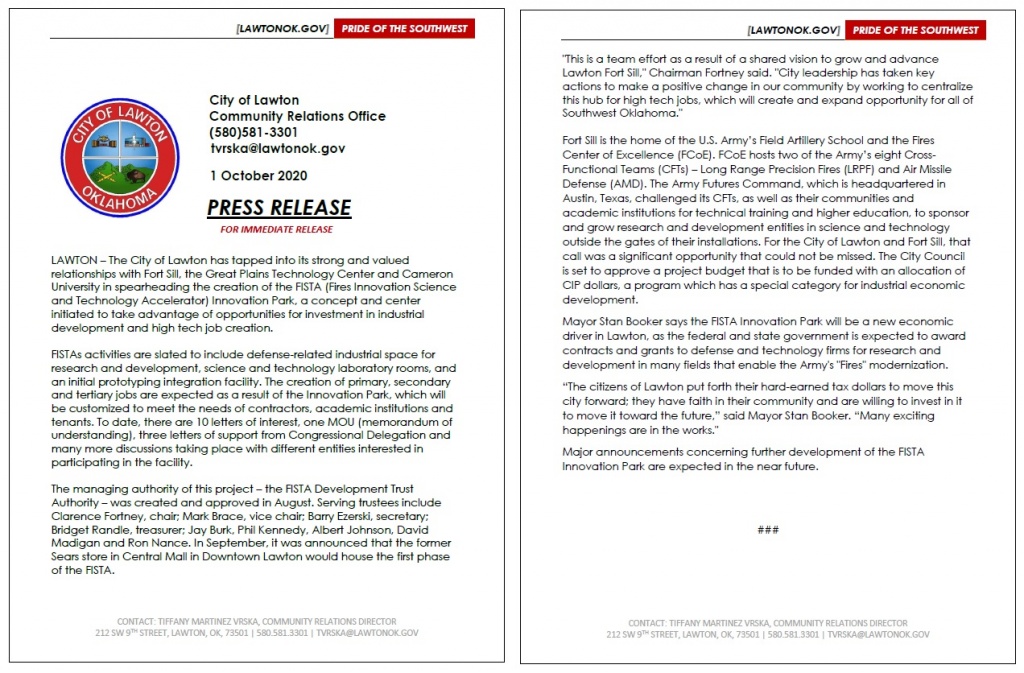 The City of Lawton has tapped into its strong and valued relationships with Fort Sill, the Great Plains Technology Center and Cameron University in spearheading the creation of the FISTA (Fires Innovation Science and Technology Accelerator) Innovation Park, a concept and center initiated to take advantage of opportunities for investment in industrial development and high tech job creation.

FISTAs activities are slated to include defense-related industrial space for research and development, science and technology laboratory rooms, and an initial prototyping integration facility. The creation of primary, secondary and tertiary jobs are expected as a result of the Innovation Park, which will be customized to meet the needs of contractors, academic institutions and tenants. To date, there are 10 letters of interest, one MOU (memorandum of understanding), three letters of support from Congressional Delegation and many more discussions taking place with different entities interested in participating in the facility.

"This is a team effort as a result of a shared vision to grow and advance Lawton Fort Sill," Chairman Fortney said. "City leadership has taken key actions to make a positive change in our community by working to centralize this hub for high tech jobs, which will create and expand opportunity for all of Southwest Oklahoma."

Fort Sill is the home of the U.S. Army’s Field Artillery School and the Fires Center of Excellence (FCoE). FCoE hosts two of the Army’s eight Cross-Functional Teams (CFTs) – Long Range Precision Fires (LRPF) and Air Missile Defense (AMD). The Army Futures Command, which is headquartered in Austin, Texas, challenged its CFTs, as well as their communities and academic institutions for technical training and higher education, to sponsor and grow research and development entities in science and technology outside the gates of their installations. For the City of Lawton and Fort Sill, that call was a significant opportunity that could not be missed. The City Council is set to approve a project budget that is to be funded with an allocation of CIP dollars, a program which has a special category for industrial economic development.

Mayor Stan Booker says the FISTA Innovation Park will be a new economic driver in Lawton, as the federal and state government is expected to award contracts and grants to defense and technology firms for research and development in many fields that enable the Army's "Fires" modernization.

“The citizens of Lawton put forth their hard-earned tax dollars to move this city forward; they have faith in their community and are willing to invest in it to move it toward the future,” said Mayor Stan Booker. “Many exciting happenings are in the works."

Major announcements concerning further development of the FISTA Innovation Park are expected in the near future.