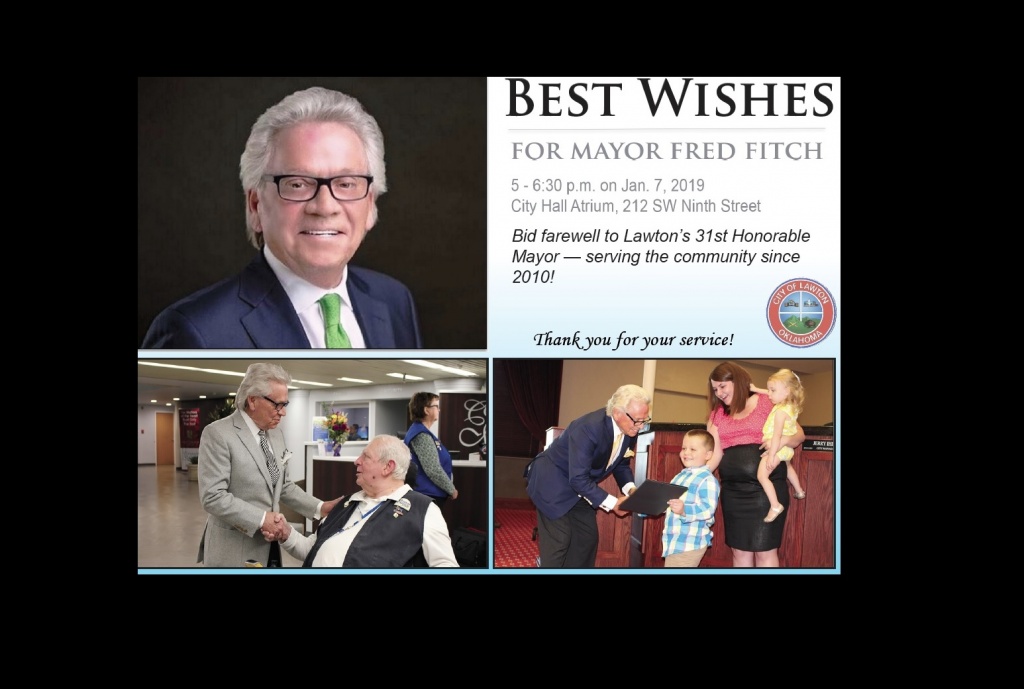 Fitch, who has served the Lawton Fort Sill community as mayor since 2010, will leave office in January 2019. He is succeeded by Mayor-Elect Stan Booker, who will be sworn in alongside incoming City Council members Mary Ann Hankins (Ward 1) and Keith Jackson (Ward 2).

“It’s been a privilege and an honor to serve as mayor for the last nine years,” said Mayor Fitch. “There are so many incredible people that make up this community – so many dedicated organizations and volunteers that I am grateful to have met and worked alongside. The City staff has been wonderful to work with, and I am confident they have the right mindsets to grow this city and keep things moving forward. I have great faith in incoming elected leadership and I just see a lot of good for the future of Lawton Fort Sill.”

Fitch’s active collaborations and business expertise have advanced various public projects such as the Second Street Rehabilitation and Tax Increment Finance project (Lawton Towne Center), establishment of the Nine Mile Creek utility corridor, the expansion of the Wolf Creek utility corridor, and critical infrastructure programs of the 2012 CIP, among other initiatives. He has been instrumental in bridging community involvement through positive community relations and outreach.

In addition to his vital roles in many committees, boards and commissions, Fitch has also earned accolades throughout his tenure, to include the 2015 Oklahoma Mayor of the Year Award and the 2018 MG (R) Lee & Terry Baxter Excellence in Leadership Award – in recognition of his demonstration of excellence in leadership and countless contributions to the Lawton Fort Sill community.

“Mayor Fred Fitch is a true asset to our community,” said City Manager Jerry Ihler. “His knowledge of neighboring communities and military affairs – Fort Sill, in particular – have been monumental in growing collaborative partnerships and opportunities for our community. He has been an incredible leader to work with.”

An Oklahoma City native, Fitch moved to Lawton with his family as a young child in 1950. He graduated from Lawton High School and pursued collegiate studies at Cameron University. He retired as President and CEO of Fitch Industrial in late 2009. Following his term as mayor, Fitch plans to continue his volunteer and leadership efforts in the Lawton Fort Sill community alongside wife Natalie.