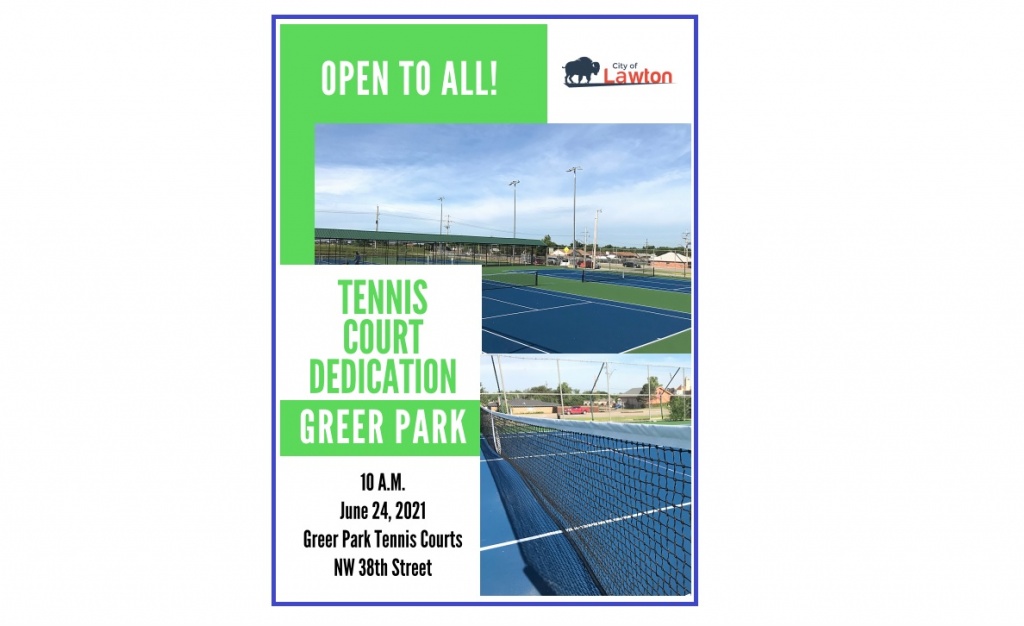 There will be a rededication and ribbon-cutting ceremony at the recently resurfaced Tennis Courts of Greer Park, NW Cherry and 38th Street, at 10 a.m. on June 24, 2021. All community members are welcome to attend for the official unveiling of extensive facility upgrades, which – in addition to leveled, resurfaced courts, new poles and nets – also include: LED lighting systems, a time-lock gate, fresh paint, new water fountains, signage, spectator benches and landscaping, as well as repaired fencing and the installation of windscreens.

"With top quality courts such as the courts we will now have at Greer Park, we will be able to host larger tournaments that bring more people to town and that is always a good thing for our city," said Jeffery Temple, City of Lawton Parks & Recreation Director. "Our first tournament on the new courts will be the Summer Sizzler Tournament in July."

Temple said crews are currently completing their last segments of work to the eight courts at Greer Park. This $320,000 project was approved by Lawton City Council in January and is funded through the 2015 CIP program.

"We're very grateful for the support of the City Council in following through on citizen-voted projects to improve the quality of life in our community," Temple said. "We're also proud of the staff members in the field who have taken on this project on top of many other responsibilities during our high season. We can't wait to debut the new courts to the whole community."

Tennis, a non-impact sport, is a very low-cost recreational activity and a sport for all ages, Temple said. Lowering resting heart rate and blood pressure, increasing aerobic capacities, improving metabolic function, and improving strength, flexibility and reaction times are just a few health benefits that may come with playing tennis. There are 13 additional tennis courts throughout the Lawton community; 35th Division Park Courts at NW Dearborn and Sixth Street have also been resurfaced this year and received new nets and poles.

View a digital invitation to the event at: lawtonok.gov/sites/default/files/publications/2021-06/COL%20Greer%20Park%20Tennis%20Court%20Dedication.pdf