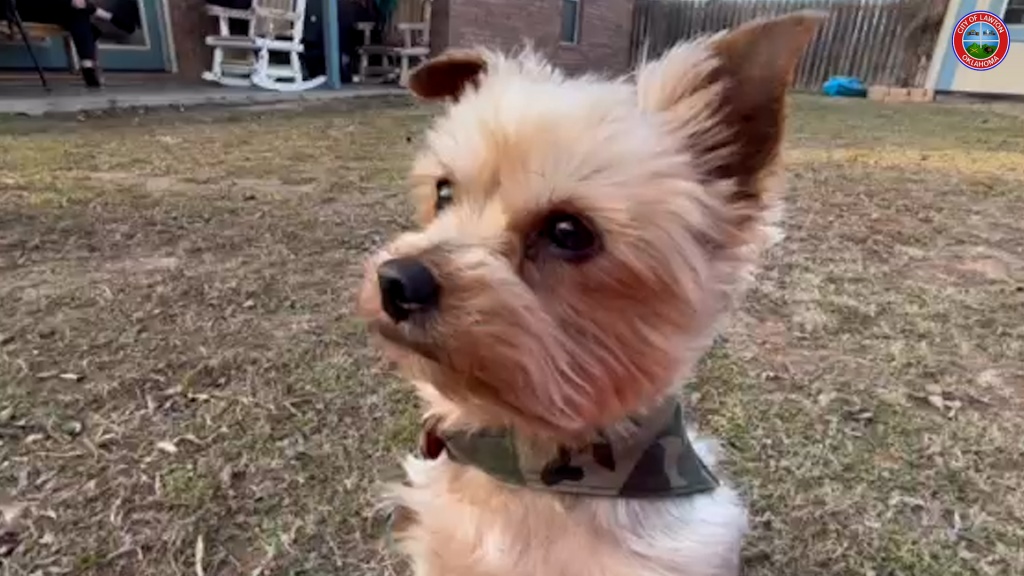 In his 18 years working for the Lawton Fire Department, Captain Shawn Seeley never dealt with an injured animal on duty - until a Sunday night in November when someone knocked on the door of Fire Station No. 6 on 45th Street in Lawton.

"It was a soldier who didn’t have a shirt on, covered in blood from the base of his neck to his stomach," said Seeley. "He was holding a dog in his shirt.”

The soldier found the dog on the side of the road, suspecting he was hit by a car. The firefighters tried to mend the animal as best as they could, but knew they had to find help quickly.

"We thought we were watching him die on the floor of our fire station," Seeley said. "He was scared, bleeding and had a major injury.”

After unsuccessful phone calls to the number listed on the dog’s collar and local vet clinics, Seeley turned to Lawton Animal Welfare.

"I called City of Lawton dispatch and asked them to send an animal control officer because I didn’t know what else to do," he said. "The dog couldn’t stay, it was injured. I worried he wouldn’t survive.”

The officer took the injured animal back to the shelter, where the team immediately rendered aid.

"All of them have multiple years of animal experience," said Dr. Gene Parker, Lawton Animal Welfare's veterinarian. "It really wasn’t out of the ordinary for them. It was only out of the ordinary because the animal had no owner and probably would have been euthanized if it weren’t for their efforts.”

Out of his hands, but not off his mind, Seeley went to the shelter the very next morning, off duty, to check on the dog and was pleased to learn he made it through the night. But his compassion for Captain didn’t stop there.

"I told them the story and said if the dog needed a home, I would be happy to take it because I knew the care he’d need and my family loves dogs anyway," said Seeley.

And it later worked out that Seeley could take the pup home to his family after a few weeks of recovery. Originally named “New York”, the Seeley’s changed the dog’s name to “Captain” wanting to his name to fit in with the family, too.

"We have a Chihuahua named Chief and stayed with the fire department theme, so we named him Captain," Seeley said. "He’s 100% part of the family, he tells us what he wants and we let him do what he wants. It was a blessing in disguise that night to see him that bad, but he made a full recovery. We couldn’t be more excited he’s part of our family.”

The efforts of the soldier, the crew at Station 6, and the Lawton Animal Welfare saved this sweet pup’s life.

“They were very welcoming to me & Captain and to anyone who needs help with their animals," said Seeley.

Captain Seeley also commended the soldier for seeking out a safe place for Captain. However, the fire department does not have the capability or the knowledge to care for animals.

If you run across a situation like this, the first thing to do, would be to try to contact the owner or an emergency vet clinic. If that doesn’t work, you can call dispatch at (580) 581-3272 & seek out an animal control officer for help.