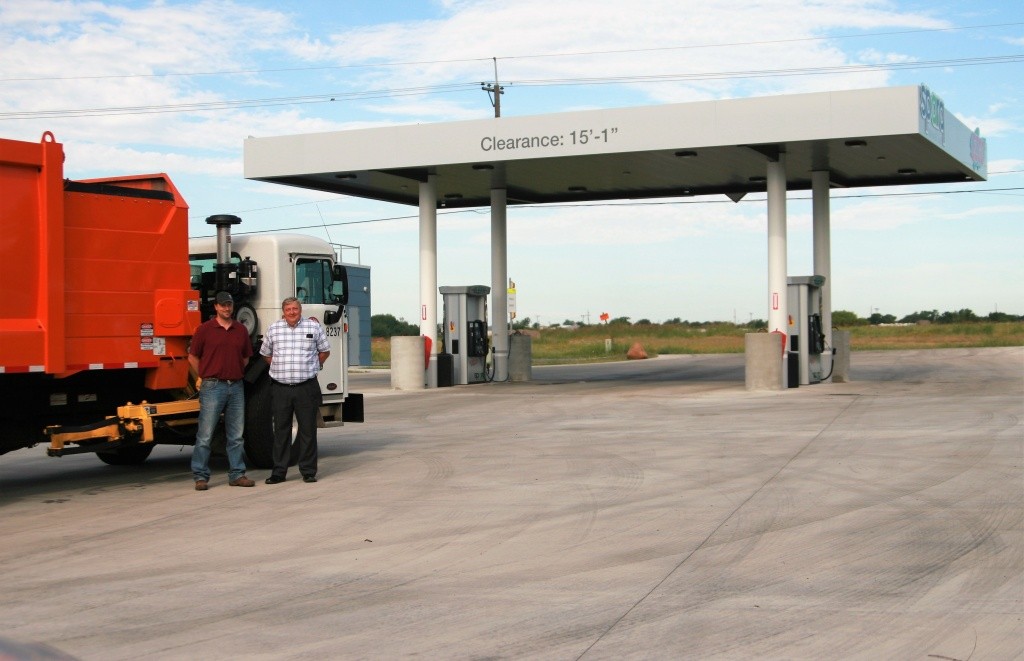 As diesel prices increased, so did the time that city vehicles were spending in the repair shop.

It was 2011 – the first full calendar-year in American history that the average price of gasoline and diesel never fell below $3 a gallon. The oil and gas industry fluctuates as it always has, but this was unprecedented.

The City of Lawton Public Works Department went to the drawing board.

“We were paying about $3.15 to $3.42 for a gallon of diesel,” recalled City of Lawton Equipment Maintenance Director Dennis Bothell. “We put our heads together and started gathering information for a plan. We started talking to folks about compressed natural gas.”

Providing CNG infrastructure for the City of Lawton had been a longtime pursuit of then Public Works Director Jerry Ihler, a 29-year public servant and former City Engineer. Ideas had been thrown around and suggestions had been given, but the time was finally right to make a move. After brainstorming with the Oklahoma Clean Cities Association and the Oklahoma Public Fleet Managers Association, Bothell released a Request for Proposal and the process formally began.

“There was a five-year period where we talked to vendors and just did a lot of research,” Bothell said. “It was great to finally see it all come together.”

In Fall 2016, ground was broken for the first – and, to date, only CNG fueling station – in Lawton on Southwest Sixth Street. The complex, adjacent to the Public Works Yard, is overseen and maintained by GoSPARQ, LLC – a company formed between Carey Johnson Oil/EZ Go and Sparq Natural Gas of Oklahoma City – that entered into a 10-year lease agreement with the City of Lawton. The entire complex was built in 90 days and officially opened for use in January 2017. The finished product yielded four fast-fill pumps, available for the general public, and 32 time-fill stations to the east for city vehicle use.

“I think we made a lot of good decisions that saved the City of Lawton a lot of money,” Bothell said, explaining the three-party mutual agreement costed tax payers nothing. “It was nice to be a part of something so good for the community; this was definitely a win-win.”

The visionary leadership of both Bothell and Ihler made Lawton a viable force in energy-saving efforts and the fight for cleaner air. It also reduced equipment maintenance costs, Bothell said, as issues with exhaust systems and diesel-particulate filters have been greatly reduced or completely eliminated with the switch to CNG. Six city-owned vehicles currently operate on CNG and another six are set to be purchased in July. An entire fleet of City of Lawton CNG sanitation trucks should be complete by 2022.