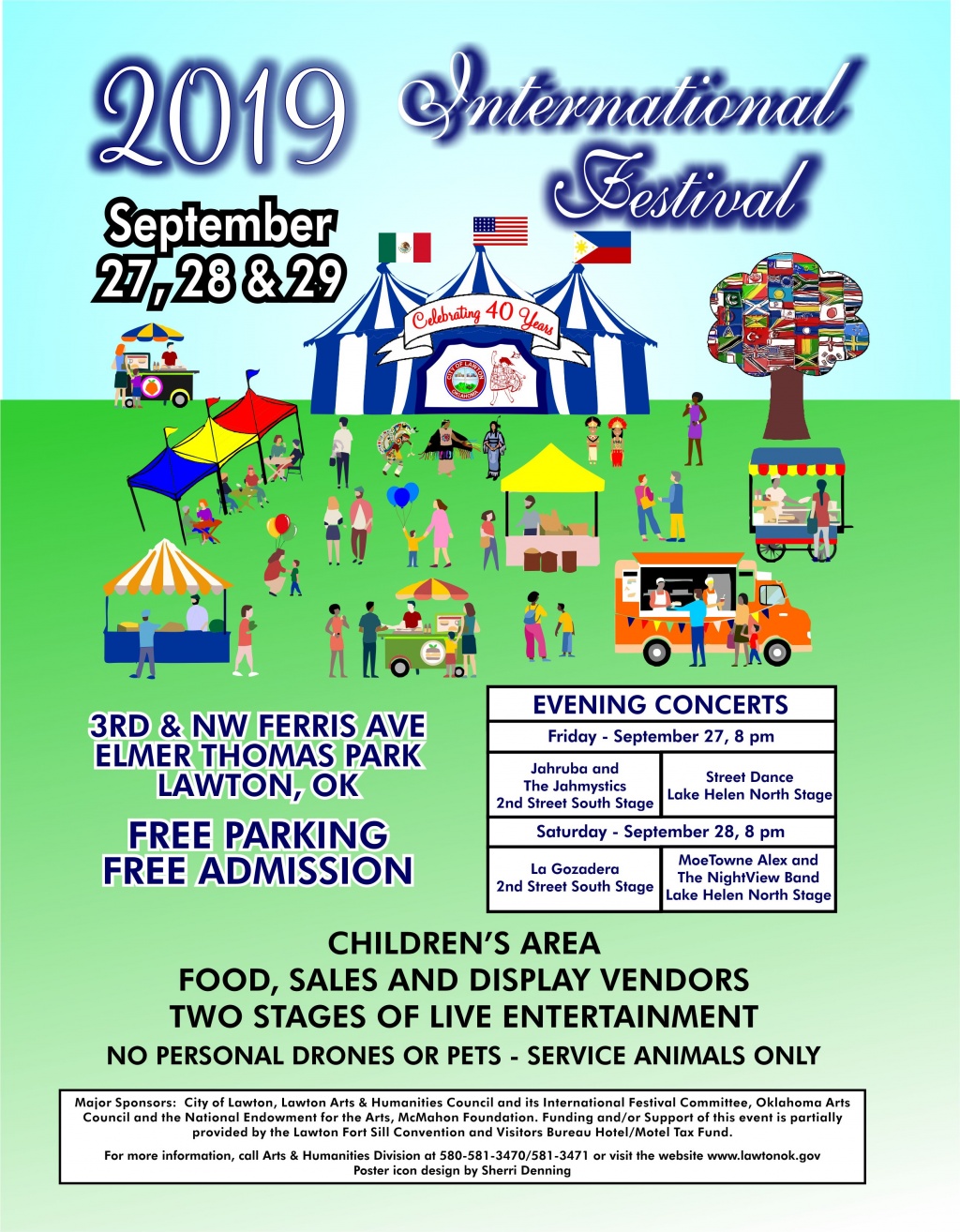 The lnternational Festival, in Elmer Thomas Park will open at 5pm on Friday, September 27. At 5:45pm, the Parade of Nations kicks off the Opening Ceremony on the 2nd Street Stage (south). There is no attendance fee or parking fee to attend this 3-day event, not even for the stages.

The Lawton Arts & Humanities Council and the International Festival Committee are excited to announce that they will again host a Naturalization Ceremony during the opening ceremony where residents representing different countries will take the Oath of Allegiance and be sworn in as US Citizens. The festival hours are Friday 5pm to 10pm, Saturday 11am to 10pm, and Sunday 12 noon to 5pm. As a means of highlighting an appreciation of heritage and culture, all patrons, volunteers, sponsors and vendors are invited to wear their traditional dress and regalia to the festival. There will be over 60 food, sales and display booths this year and includes a Children’s Area. Festival patrons will have many entertainment choices throughout the three days.

The International Festival Committee is bringing back the community “Street Dance”, Friday, September 28 at 8pm on the Lake Helen Stage (north). The street dance’s DJ will present various musical genres from around the world. This very popular event plays host to all ages.

Back by popular demand! They are an original R&B Soul Band with sounds of the 70's, 80's & 90's that include HipHop, NeoSoul Jazz and Blues, they have performed in Texas, Oklahoma and Arkansas. In Oklahoma, they have performed at the Oklahoma City Arts Council’s Arts Festival, Concert in the Garden at the Oklahoma State University in Stillwater, Myriad Gardens in Oklahoma City, and more! Visit them on Facebook at www.facebook.com/Moetowne-Alex-The-Nightview-Band.

This Oklahoma musical group’s name translate to “Enjoyment”! It is composed of several Latin American and Caribbean musicians, bringing to the stage the flavor that identifies them. This high energy band has performed at Oklahoma City’s Day of Love and Friendship, Women’s Expo and Fair for Businesswomen, Tulsa’s Gathering Place, Guthrie on the Green’s Global Music Festival for the Tulsa Global Alliance and many special events. Visit them on Facebook, La Gozadera Latin Band.

This high-energy show features a variety of circus skills and creative props.  When Michael King finished college, he was recruited to perform for a circus. He spent a year traveling with the circus throughout the United States and Canada. Upon returning from the circus, Michael decided to utilize the skills he learned from his experience to create a one-man circus show. Michael performs a potpourri of juggling, unicycling, balancing, and magic acts combined with family-oriented comedy into a high energy show for all ages.

Major sponsors of the 2019 International Festival are the City of Lawton, Lawton Arts & Humanities Council and its lnternational Festival Committee, Oklahoma Arts Council and the National Endowment for the Arts, McMahon Foundation, and funding and/or support of this event is partially provided by the Lawton Fort Sill Convention and Visitors Bureau Hotel/Motel Tax Fund.  In addition, media sponsors of the event include Magic 95, Hot Country 973 FM, Sooner Classic Hits FM, The Lawton Constitution, Townsquare Media Lawton with KLAW 101, Z94, and 107.3 POPCRUSH, KCCU – FM, KSWO-TV, The Breeze 99.5 FM, Lawtoninfo.com and Mollman Media.

For public parking, enter the park at 3rd & NW Ferris Avenue. Free shuttle service will be provided during the following hours from the McMahon Memorial Auditorium parking lot, 801 NW Ferris Ave. to the festival site.

Please note that the festival will go on rain or shine, and some events may be subject to change without notice. For all events and locations on the festival grounds, the festival committee respectfully requests that all visitors refrain from bringing pets (service animals only), bicycles, skateboards, drones and alcoholic beverages.

Besides having fun, volunteering offers opportunities to meet new people, gain valuable experience for resumes or college applications, provides community visibility for organizations or businesses as well as great bonding experience for families and groups.

For more information, call the Arts & Humanities Division at 581-3470 or 581-3471 or visit the website at www.lawtonok.gov as well as the International Festival on Facebook.