McMahon Memorial Auditorium to host The Bellamy Brothers in Concert 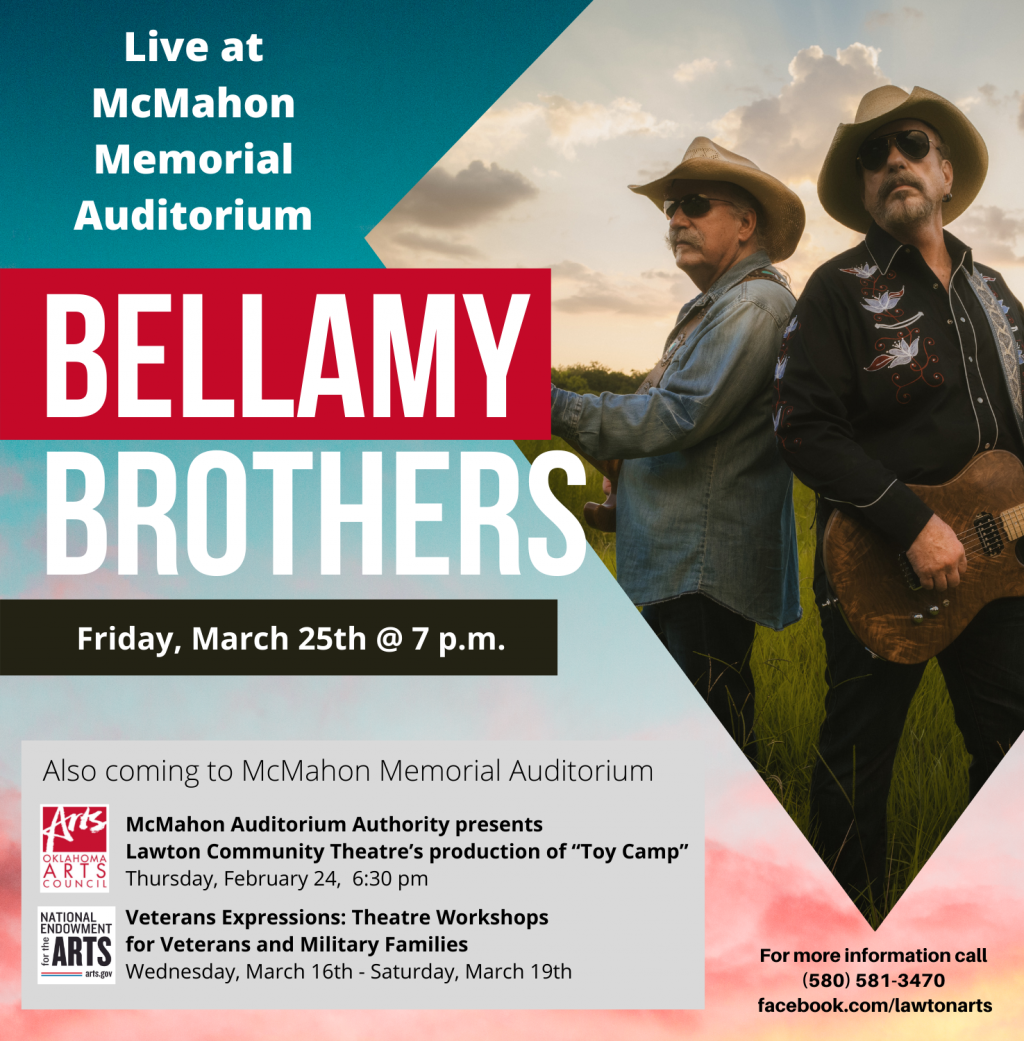 The McMahon Auditorium Authority is proud to present “The Bellamy Brothers” live in concert at the McMahon Memorial Auditorium Friday, March 25th at 7 p.m.

Tickets are scheduled to go on sale soon. Visit swokarts.com and signup for our newsletter to get an alert when tickets are available.

The Bellamy Brothers officially lifted off the launch pad in 1976 when their single, “Let Your Love Flow,” became an instant smash in both the U.S. and Europe. It stayed on the international charts long enough to build a huge international fan base for the hip young brothers that endures to this day.

By the late ‘70’s The Bellamy Brothers were emerging on the country charts with another bona fide smash. “If I Said You Had A Beautiful Body (Would You Hold It Against Me),” originally scrawled on a dinner napkin by David, rocketed them to the top of the country charts the way “Let Your Love Flow,” had done in the pop market just a few years earlier. It proved to be the first of a string of fourteen No. 1 singles in the U.S. alone.

Success followed success for the brothers who, along the way, created a patent on the newly cool “duo” category in country music. In the era of the 2000s, The Bellamy Brothers hold the record in both the Academy of Country Music and the Country Music Association Awards for the most duo nominations. Numerous GRAMMY nods have also been directed toward the brothers.

Their most recent project, Bucket List, debuted in July of 2020 with “Rednecks (Lookin’ for Paychecks),” a timely take on the current situation, leading the EP. Bucket List also includes “No Country Music For Old Men,” a collaboration with longtime friend John Anderson inspired by the loss of Kenny Rogers, and more light-hearted songs like “Lay Low, Stay High.”

“We are excited for the Bellamy Brothers to be the first of our 2022 concert season,” said Max Sasseen, McMahon Auditorium Authority Chair. “We are expecting a great turnout for this concert. Our goal is to produce quality entertainment for the citizens of Lawton and we believe this concert goes above and beyond that goal.”

The McMahon Auditorium Authority is a City of Lawton public trust. The mission of the authority is to further the vision of Mrs. Louise D. McMahon to advocate the advancement of the arts and other educational and cultural endeavors through the use of the McMahon Memorial Auditorium.

The Oklahoma Arts Council is the official state agency for the support and development of the arts. The agency’s mission is to lead in the advancement of Oklahoma’s thriving arts industry. The Oklahoma Arts Council provides approximately 425 grants to nearly 275 organizations in communities statewide each year, organizes professional development opportunities for the state’s arts and cultural industry, and manages the art collections at the Oklahoma State Capitol. More information is available at arts.ok.gov.

The City of Lawton Arts and Humanities support the cultural endeavors of the City of Lawton as well as the arts and humanities organizations, individuals and other governmental agencies in the area. The division manages the McMahon Memorial Auditorium and is a part of the Parks and Recreation Department.