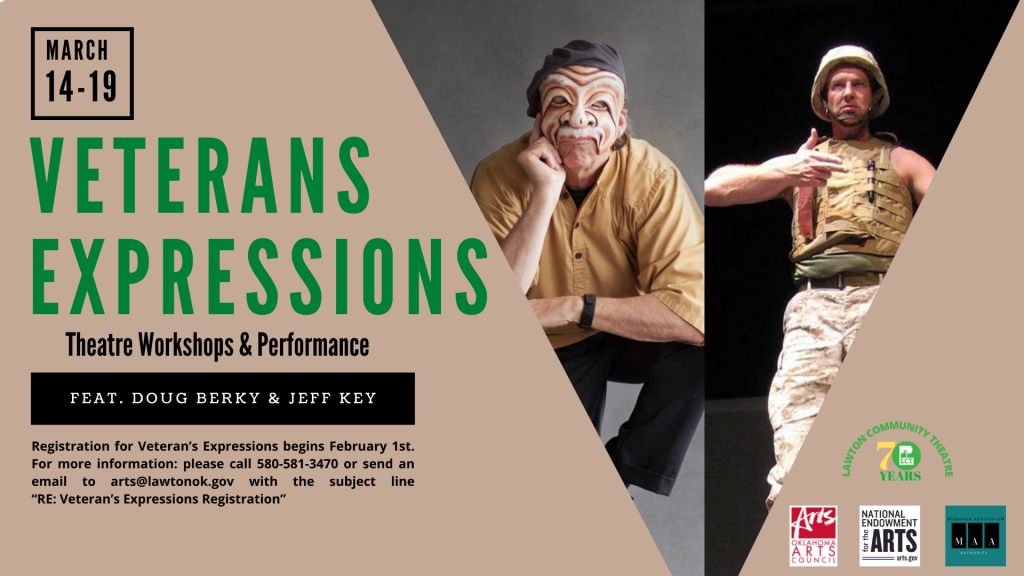 The McMahon Memorial Auditorium in collaboration with Lawton Community Theatre is preparing to host “Veterans Expressions” a series of theatre workshops that aims to assist veterans and their family members in connecting and sharing stories through the performing arts: acting, playwriting and spoken word. The workshop will be held at the McMahon Memorial Auditorium, 801 NW Ferris, Lawton, Okla., March 14th – 19th, 2022.

Veterans, military family members, or family units will be teamed with qualified performing artists and/or poets and playwrights to teach them how to turn aspects of their personal journeys into short performance pieces.

Doug Berky has been creating and evolving his own brand of physical theater for over thirty years. His original performances weave together classic theatre forms of mime, mask theatre, clowning, circus arts, physical comedy and storytelling. With each performance, Doug entertains, teaches, inspires and creates space for contemplation. Doug is known internationally for his mask construction. He designs and constructs the masks for his own performances as well as creating all of the sets, choreography, scripts and many of the costumes. His family friendly programs vary from Vaudevillian comedy to the tragedy of human folly.

Jeff Key is an American actor, playwright, veterans advocate and activist. He is also an honorably discharged Marine and an Iraq veteran. His one-man performance piece, “The Eyes of Babylon,” is based on journal entries he wrote while at war. Key performed the play in several U.S. cities and in Ireland over a period of seven years. Key is the founder of The Mehadi Foundation, a non-profit organization designed to help veterans find solace and employment in the Arts/Entertainment industry and to support philanthropic efforts in Iraq. This foundation is named for a young Iraqi boy he met while in Iraq. He also works very closely with Warrior Writers, a national organization which helps veterans get pen to paper as well as other creative expression as healing tools.

Registration for Veteran’s Expressions begins on February 1st. For more information, please call 580-581-3470 or send an email to @email with the subject line “RE: Veterans Expressions Registration”.
_

Additional support provided by the McMahon Auditorium Authority, Lawton Community
Theatre and the City of Lawton.

The McMahon Auditorium Authority is a City of Lawton public trust. The mission of the
authority is to further the vision of Mrs. Louise D. McMahon to advocate the advancement
of the arts and other educational and cultural endeavors through the use of the McMahon
Memorial Auditorium.