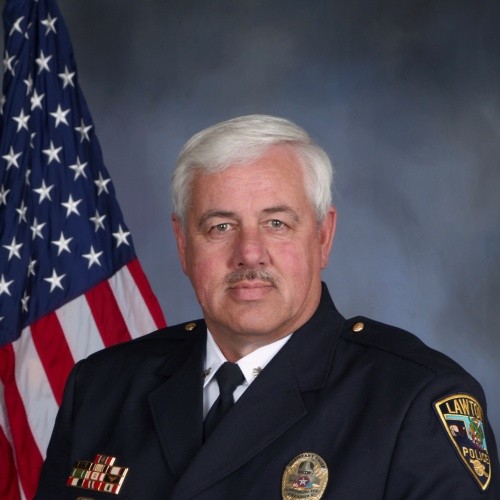 Deputy Chief James Apple began his career with the Lawton Police Department in January of 1980. During his 30+ years with the department Deputy Chief Apple was assigned to the Uniform Division as a patrolman and a Field Training Officer. He also served as a traffic officer and a member of the Traffic Action Program. In 1988 he transferred to the Education & Training Division where he served as a CLEET certified academy instructor and a Crime Prevention Officer. He was instrumental in the beginning of the department's D.A.R.E. program and became national certified as a D.A.R.E. Mentor. He was promoted to the rank of lieutenant and reassigned back to the Uniform Division. In December of 2001, he was promoted to Captain where he served as a Watch Commander.

Deputy Chief Apple holds both an Associate Degree and a Bachelor's Degree in Criminal Justice from Cameron University. Deputy Chief is a graduate of the 221st session of the FBI National Academy , Quantico , Virginia .

Deputy Chief Apple is an Eagle Scout (class of 1975), a 32nd degree Mason, and a recipient of the Camp Fire Sebago Award. He is a member of the Lawton Heights United Methodist Church where he serves on the Board of Trustees, Staff-Parish Committee, and the Finance Committee. Deputy Chief Apple was selected as the 2005 LPD Supervisor of the Year.


Send us a message